Rivalries define the sport of college football; it is a large reason why I love it so much more than any other sport. Rivalries can define a season. They can save a coach’s job as easily as they can doom a coach’s job. For the former, Charlie Strong was on thin ice already in 2015 but was able to save his job by beating #10 Oklahoma in the Red River Shootout. In the latter, many were on the fence about Mark Helfrich keeping his job until Oregon State beat Oregon by destroying them in the running game. He was fired three days afterwards.

Oregon State has not had a winning season since 2013 (only by virtue of winning their bowl game, mind you). Head Coach Gary Andersen is currently sporting a 6-18 record over two seasons. Oregon State is not a program that is quick to fire a coach, but beating hated rival Oregon for the first time in nine seasons certainly helped cool off his seat. The Beavers have never been a blue chip program, but they are not unfamiliar with program success and it all starts with dominating the state. 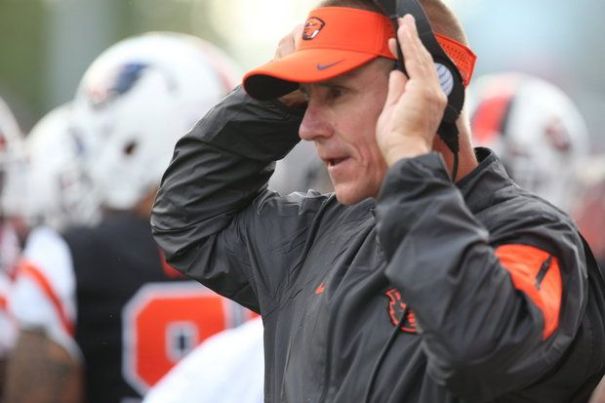 Andersen’s predecessor, Mike Riley, led the Beavers through fourteen of the last eighteen seasons (with a brief stint with San Diego in the NFL). With the help of Dennis Erickson, the Beavers saw the AP Top 25 in eleven of those seasons. Riley took the job at Nebraska in a move that very well may have been a preemptive move considering the downward trajectory of the program. Gary Andersen is not inexperienced, though, having been the head coach at Southern Utah, Utah State, and Wisconsin before taking the job in Corvallis.

In 2011, at Utah State, Andersen coordinated a brutal rushing attack featuring Robert Turbin. Turbin racked up over 1,500 yards that seasons. The next year, Utah State finished in the AP Top 25 for the first time since 1961 on the coattails of running back Kerwynn Williams rushing for over 1,500 yards, as well. Andersen left for Wisconsin in 2013 and brought his rushing attack with him. In 2013, James White and Melvin Gordon combined for over 3,000 yards on the ground. In 2014, Melvin Gordon finished with 2,587 yards on the ground. Rumors were abound of a schism between Andersen and the athletic director that pushed him to Corvallis.

In the two years Andersen has coached, he has not been able to put together the rushing performances that has become expected from his offenses. It is not unfair to say that he might not have had the talent at the position that he was used to. Over the offseason, the big news coming out of Corvallis was former 5* Oregon Ducks running back coming out of medical retirement to join the Beavers for the 2017 season. This is a huge addition to an offense that saw definitive progression from 2015 to 2016 in the rushing department. Alongside Tyner, Ryan Nall returns after a nearly-1,000 yard season. On top of that, their receiving corps returns to allow whoever of the quarterback candidates a comfortable supporting cast.

There must be something in the water in the state of Oregon that puts defenders into a coma on the field. The Beavers were certainly not as bad as the Ducks, but being 82nd in the nation in points allowed per game is nothing to be proud of. It is easy to look at Andersen’s rushing offenses of the past as his strength, but the man came up through the ranks as a defensive coach. His time at Utah State and Wisconsin saw many Top 25 defenses. There was a step forward last year, but if the defense does not take another major step, especially in the run defense department, you can consider 2017 as another sub-.500 year.

The Pac-12 is a very tough conference and the Pac-12 North remains the stronger division until proven otherwise. Oregon State catches USC and Colorado from the South but dodge Utah and UCLA (facing the Arizona schools instead). The Beavers also scheduled a strong out-of-conference schedule with Minnesota and Colorado State (of which I predict they drop both). Oregon State remains a program in flux and this season is not going to be the year where they make a remarkable step forwards or backwards.

Catch the other Pac-12 previews here!